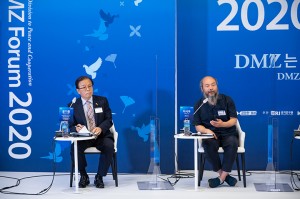 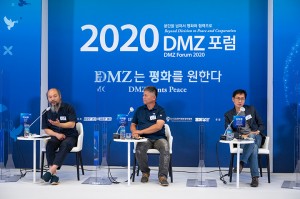 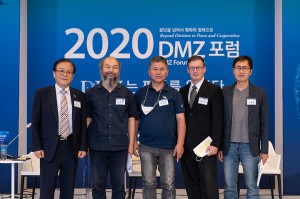 Militarization of the Border Area and The Right to Live in Peace
Photographer Si Woo Lee (이시우)
Summary
South Korea’s border area is an area that includes the cities and towns south of
DMZ and CCL. South Korea calls the area that is north of the 38th parallel, which
forms part of this area, as are claimed are a but the US calls it an are a under
the military occupation. This is base don’t he illegal measure by US that distorted
the UN General Assembly on October 12, 1950 to create the UNC Commander as
the governing sovereign of the are a north to the 38th parallel. In 1954 the
Syngman Rhee administration made the concession of being transferred only the
administrative control, rather than the sovereignty of this region. But this decision
was not even ratified by the National Assembly. Although the sovereignty of this
area seems to have been restored in practice, there has been no legal resolution.
The nature of this are a as an area under the military occupation defined not only
South Korea’s DMZ, but also that of the surrounding regions that is the border
area. After the Armistice Agreement became a dead letter in 1996, the UNC
Regulation practically forms the basis of armistice management. However, the UNC
Regulation is an internal regulation by the UNC that is not agreed to by North
Korea or is not included in South Korea’s Constitution and law. The UNC
Regulation never the less approved the militarization of the DMZ, which is a clear
violation of the Armistice Agreement, and is even strengthening South Korea’s
sovereignty. For example, the UNC Regulation 95-3 is a regulation on the
management of prohibited area of air flight, and still controls the sky of some
parts of the border area and CCL that is south to the DMZ. Militarization of the
DMZ accelerated in the 1960s and the border area was transformed into a highly
concentrated military zone. Such militarization a mid the state in which the DMZ
south to the MTL and areas north to the 38th parallel was defined as under the
military occupation of the UNC Commander was directly related to the changes in
US world strategy and was carried out simultaneously. The Cuban Missile Crisis
and the Vietnam War were main causes that triggered the militarization of the
DMZ and border area. In addition, as a result of the implementation of the policy
to return residents to the area north of the 38th parallel in 1954, the regional
society was newly formed around anti-communist individuals and the pro-US,
anti-communist conservatism also strengthened as a result. Movements that
opposed US forces in Korea were strong even during the times of dictatorships.
The residents’ extensive resistance movement with regard to the lynching of Lee
Gil Yong at Paju US military base in 1962 led to the enactment of the SOFA. As democracy became an undeniable trend in South Korea and the spirit of
inter-Korean reconciliation cooperation was heightened, border area’s resistance
against damage by the military base and facilities became fierce in the form of
resistance against Stories firing range, Mugeon-ri firing range, and the death of
two middle school students caused by the US armored vehicle. A deep realization
of the right to live in peace was realized from the events caused by the solidified
militarized system, such as the USmilitary base. A law was enacted to support
border area that responded to the expectations of the marginalized local society,
but this had the limits of finding solutions from the perspective of property rights.
The act of strong resistance to the withdrawal of military force when the distortion
of border area economy was caused by militarization shows the paradox created
by economy-first policy that is not based on the right to live in peace. The
economy can develop while relying on either the military force or peace, but
economy that relies on the military force often conflicted with peace. The right to
live in peace does not remain as a passive resistance to the threat to peace but
includes the active right to demand the creation and securing of rich peace
through a new economic system that relies on peace. This is why the right to live
in peace must be developed into an active right.